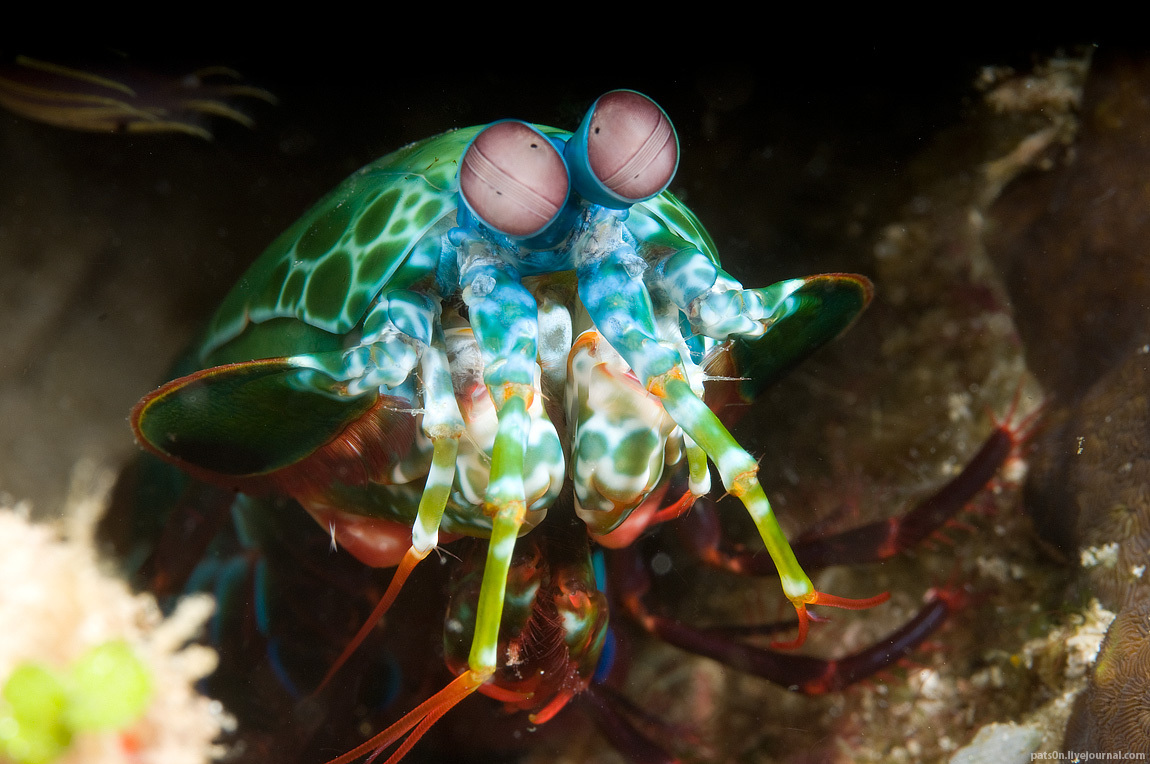 Which one of these weird animals and critters are you meeting for the first time? Discover animal kingdom oddballs that 500px photographers have captured for you, with jaw-dropping features that range from wide cartoon-ish eyes to extremely long limbs and snouts to exaggerated body parts that look downright scary. Plus, you’ll get the story behind each of these photographers’ wild encounters. Scroll down!

“This is a maned wolf from the Piaui State of northeastern Brazil. It is the tallest wild canid in the world standing over 4 feet at the shoulder. Due to its red fur and fox-like face and ears, it is often called a fox on stilts. This particular wolf came sniffing around our camp the previous two nights but I was hoping to photograph it in existing light without flash. Maned wolves are mostly nocturnal but will forage in the morning and late afternoon and finally on the third night it came by early enough that I was able to get a bunch of shots before dusk.” – Sean Crane “The gharial (Gavialis gangeticus) also called Indian gavial or gavial, is the only surviving member of the once well-represented family Gavialidae, a long-established group of crocodilians with long, slender snouts. The gharial is listed as a critically endangered species by IUCN.” – Manuela Kulpa 3. A family of Patagonian Hares (Mara)

“I was very surprised to find these giant hare-like animals just wandering freely around the children’s play area in Nottingham! They are called Mara or Patagonian Hares, and they are quite big with very spindly legs. They seemed very calm and just nibbled on grass. I guess they can’t be too dangerous! I saw a family of these hares watching steadily at the visitors.” – Ranjit Pol

“A Philippine Tarsier from Bohol Island in the Philippines. This is one of the cutest animals I have ever photographed!” – Will Burrard-Lucas “I love the expression on this Proboscis monkey face. It is so comparable to a human expression.” – Ben Cherry “These deer are found at my local photography spot. Notice the tusks!” – Simon Alderton

“Both the musk deer and the water deer have “fangs” or “tusks” instead of antlers, making them seem rather intimidating. (Some of the locals call them “Vampire Deer”) Both are classified as threatened or vulnerable. Photographed in the wild near Gunsan, North Jeolla Province, South Korea.” – Devon Pike

“One of the most impressive birds of freshwater swamps of central tropical Africa, distributed from southern Sudan through parts of eastern Congo, Rwanda, Uganda and western Tanzania. Shoebills are largely piscivorous but are assured predators of a considerable range of wetland vertebrates.” – MonAmi Photography “The shoebill (Balaeniceps rex) is one of the most sought after bird in Africa. A most amazing bird with prehistoric looks – its height of up to 150 centimeters (5 feet) and weighs up to 14 pounds – a most amazing bird found in the pearl of Africa – Uganda. The Arabs used to call the Shoebill Stork – “Abu Maruk” meaning father of the shoe – one could call the Shoebill Stork a flying shoe because of his unique bill. Amazingly this prehistoric looking bird can live for 50 some years. The population of the shoebills is estimated at between 5,000 and 8,000 individuals, the majority of which live in swamps in Sudan, Uganda, eastern Democratic Republic of the Congo, and Zambia. BirdLife International has classified it as Vulnerable with the main threats being habitat destruction, disturbance and hunting.” – Manuela Kulpa “The stoat (Mustela erminea), also known as the ermine or short-tailed weasel, is a species of Mustelidae native to Eurasia and North America, distinguished from the least weasel by its larger size and longer tail with a prominent black tip.” – Etienne Francey “Taken at the British Wildlife Centre in England UK. This Stoat was entertaining the crowds with operatic arias and some more modern ballads also, it had a very good voice too…would I lie to you?” – Geoffrey Baker “I love Mantis Shrimp. I really never get over how cool they are. The colors. The strength. The crazy way they run around underwater. I found this guy crossing between bommies and he politely stopped to check me out. He gave me just enough time to capture a shot of his curiosity!” – Christopher Newley

“This is Arthur’s last photo. After 13 days Arthur is now on his way out of this world. He’s been a great subject to use to develop macro techniques. It’s been a pleasure to photograph him. It’s interesting how a small life like this take on a different level of significance when looked at closely. I will miss my latest subject.” – Ben Roffelsen “The okapi is a mammal native to the Ituri Rainforest, located in the northeast of the Democratic Republic of the Congo, in Central Africa. Although the okapi bears striped markings reminiscent of zebras, it is most closely related to the giraffe. Okapis are classified as endangered since 2013.” – Imran Azhar “One of the most remarkable scenes while standing on the floe-edge near Arctic Bay, Nunavut was witnessing these beautiful creatures swim just feet away. Narwhal are known as the unicorns of the sea.” – Michelle Valberg “The gerenuk, Litocranius walleri, also known as the Waller’s gazelle, is a long-necked species of antelope found in dry thorn shrubland and desert in the Horn of Africa and the African Great Lakes region.” – Andrew Butterfield “This photo was taken in the Loxahatchee National Wildlife Refuge. The females are bugs with the sharp points, males have the wider points.” – Scott J

“In the late afternoon during our 5-day hike in the Tunisian desert we encountered a special creature. This animal is a jerboa (Dipodidae). It is hopping desert rodent which looks like a small kangaroo and it can be found throughout Northern Africa.” – Stefan Cruysberghs “So hard to capture because they only surface for a split second!” – Christine Coleman

“Yes I am old but this is not a picture of a dinosaur. Wandering around in the Viera Wetlands are these Florida Soft Shell Turtles. Clearly with a face that only a mother could love, these throw back to Old World Soft Shell Turtles could easily be thought to have come from eons ago! They lumber around the wetlands showing up on the banks from time to time.” – Thomas Rabideau “A soft-shelled turtle enjoying a some greens with lunch!” – Larry Frogge

“The babirusas (from Indonesian b?b? r?sa, lit. “deer-hog”) are a genus, Babyrousa, in the pig family (Suidae) found in Wallacea, or specifically the Indonesian islands of Sulawesi, Togian, Sula and Buru. All members of this genus were considered part of a single species until 2002, the babirusa, B. babyrussa, but following the split into several species, this scientific name is restricted to the Buru babirusa from Buru and Sula, whereas the best-known species, the north Sulawesi babirusa, is named B. celebensis. If a babirusa does not grind its tusks (achievable through regular activity), they will eventually keep growing so as to penetrate the animal’s own skull.” – Syahrul Ramadan “Taken at the Sea Life Centre in Weymouth.” – Colin Langford “My son and I found this amazing little creature while catching prawns (trying to!). I’ve only ever seen one of these animals once before many years ago when my son was very small – he is now 16yo. We saw it on a beach but had no idea what it was at the time. It became a story that we talked about for years and my son would often say “Remember when we saw that crazy blue ‘fish’ on the beach?” The way they move it isn’t hard to believe it could be some sort of exotic fish. I learned years later that it was in fact a type of Nudibranch, a marine gastropod mollusk or sea slug. Well, much to our excitement we found one again and this time I was able to get photos for the record. This wasn’t an easy photo to take and I’m not sure of the exact details because it took a fair bit of experimenting to get a shot I was happy with. I’d be happy to share a few tips and more details if anyone is interested. It involved a macro lens, a bucket, off-camera flash, mosquito bites and sandy, wet knees.” – Steve Passlow “They are watusis, a breed of cattle native to Africa, with large horns. I took this picture some years ago, It was just a few seconds under the rain. Magical seconds.” – Marina Cano “These small geckos are native to Madagascar. Other leaf-tailed geckos of the genus Uroplatus share a similar flattened tail, but the satanic leaf-tailed gecko has arguably the most leaf-like tail when compared to congeners. This is a fairly old photo, but proves that you can take nice photos with relatively cheap cameras. This was only a 3.2 megapixel Nikon Coolpix 3700…well before I had begun shooting with a DSLR.” – Mike Martin “The leaf-tailed geckos are native to Madagascar and are renowned for their camouflage. This individual is just a juvenile. Many of the leaf-tailed gecko species press their bodies against wooden limbs and trunks during the daytime, and their flattened bodies, fringes, and tails eliminate any shadow, making them invisible to predators. At night, they become active and hunt primarily invertebrate prey.” – Mike Martin “Colombia: This Surinam Toad was found in a shallow section of a muddy creek alongside 4-5 other specimens. We ended up finding one other specimen at another location later in the trip but we were unable to catch that specimen. These interesting frogs use their star-shaped fingertips as a sensory tool for prey capture. All of the individuals we observed were positioned similar, with their front limbs outstretched in front of their mouth and partially buried in loose muddy leaf litter.” – Nathan Shepard

Got a bizarre animal photo or personal encounter in the wild to share with us? Leave a comment below!